I just came across the recently published data from the GenForward project in the United States, a nationally representative survey of over 3,000 young adults aged 18-36 conducted by political scientist Cathy Cohen at the University of Chicago. The new data on race, young adults, and the 2020 elections paints a challenging picture of how young adults in the country perceive institutions and democracy. For those who think the recent election outcome put democracy back on track, these results reveal important challenges, but also opportunities.

Prior to the election, in an interview with the Washington Post, Donald Trump  asserted that “Negative enthusiasm doesn’t win races. Positive enthusiasm, meaning ‘they like somebody’ is how elections are won.” But judging from the survey, negative enthusiasm was determinant in young voters’ choices: 64% of respondents said they would vote for Joe Biden precisely because they disliked the other candidate. There are significant differences across the profiles of respondents: for instance, only 28% of white respondents indicated that they would vote for Biden because they were enthusiastic about the candidate, while this number reaches 47% for black respondents. 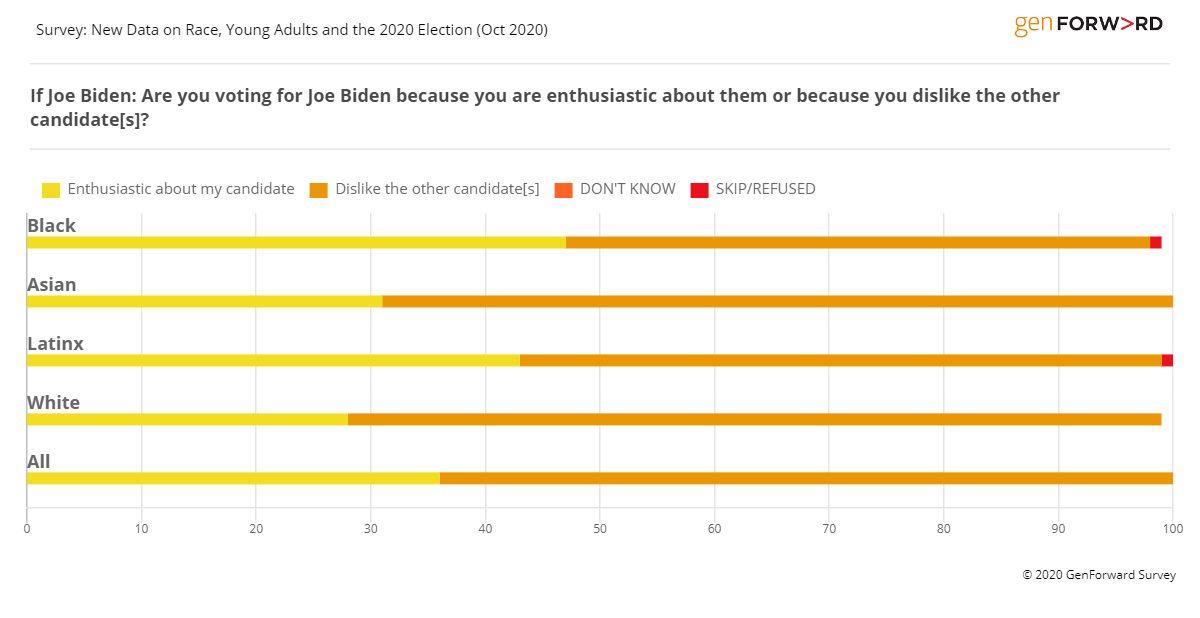 While these numbers can be disheartening, one could say they just show democracy at work, with young adults sanctioning the incumbent at the ballots. Add to that the polarized nature of elections, and the results are hardly surprising. But could this also reveal something more worrisome, particularly in the long-term? After all, research shows that voting is a rather habit-forming behavior: a citizen who votes today is more likely to vote in the future, and an 18- year-old who votes for a certain party now is likely to be voting for the same party when he turns 81. Does antagonistic voting behavior follow the same pattern? If it does, what signal does it send to parties? And what does it mean for the future of US democracy if such adversarial behavior crystalizes in the long-term?

Overall, 83% of respondents agreed (strongly or somewhat) with the statement that “the government is run by a few big interests, looking out for themselves and their friends.”

These results may seem surprising, but how do they fit with reality? Let’s take, for instance, the US Congress. While only 3% of the US population is made up of millionaires, in Congress they are a majority. And while workers make up more than half (52%) of the US population, they are only 2% in Congress. Is this exclusive club of Congress an exception in American politics? Unfortunately not. When looking at all levels of US government, politicians from working class backgrounds are less than a tenth of all elected officials.

Some might argue that these disparities are not necessarily problematic, as elected individuals can act on behalf of broader interests. But as the saying goes, “if you’re not at the table, you’re on the menu.” Similar to most representative systems around the world, US policymaking is systematically biased towards the interests of the wealthier. So, while it may be depressing that 83% of young adults feel the government is run by a few big interests, it is understandable in the face of a governmental model that is, unfortunately, by the rich and for the rich. This discredit of representative institutions is reinforced by another result of the survey: 75% of young Americans agree (strongly or somewhat) with the statement “The leaders in government care very little about people like me”, revealing a sense of political alienation.

4) Between discredit and revolution

Young adults were also asked about the most effective way to drive real change in the country. And their responses tell us a lot about how they currently perceive traditional democratic institutions and their capacity to address collective issues. First, only 16% of respondents answered that real change can be achieved by voting in national elections. In other words, the overwhelming majority of young adults in the US reject the notion of voting in presidential elections as the ultimate democratic practice in the country.

Second, 22% of respondents find that voting in state and local elections is the most effective way to bring about change. One can only speculate on the reasons for this, but here are a few potential explanations that come to mind. In socioeconomic terms, sub-national institutions are slightly more representative than national ones. This, at least hypothetically, should make these institutions marginally more responsive to larger constituencies. Also, given that most of the participatory institutions that allow citizens to impact decision-making in the US are at the sub-national level (e.g. referendums, initiatives), citizens may perceive state level institutions as being more responsive. Finally, the recent protagonism of some state  governments in the response to the Covid-19 crisis might also play a part in these views.

Third,  38% of responses on the most effective ways to create real change in the US mention unconventional (non-electoral) forms of public participation, including categories such as protests, boycotts and social media campaigns. This is the same proportion as answers mentioning voting in elections, presidential and subnational, combined. Most strikingly, the third-most selected means to bring about change is “revolution” (14%). While the term revolution is not clearly defined here, this result certainly shows an eagerness for structural change in the way American democracy works, rather than milder reforms that are unlikely to alter the status quo. If we add revolution to the list of non-electoral forms of participation, these represent a total of 52% of survey responses.

In short, the majority of young Americans between 18 and 36 years old, a sizable part of the electorate, finds that the best way to effect real change in the US lies outside typical democratic institutions. Even the much celebrated “return to [pre-2016] normalcy” following the recent election result is unlikely to reverse this picture on its own. After all, it was this very political normalcy of recent decades, characterized by inequality and poor responsiveness, that led to the situation that now affects US democracy.

Not indifferent to the fact that a return to the pre-2016 era is unlikely to be sustainable, there are now a number of proposals on the table for how American democracy could be strengthened. These include, for instance, the Protecting our Democracy Act, the six strategies put forward by the Commission on the Practice of Democratic Citizenship, and the implementation of proportional voting, most effectively defended in Lee Drutman’s recent book Breaking the Two-Party Doom Loop.

While most of the proposed reforms are well-intended and likely to produce positive results, they are unlikely to address the fundamental issue of unequal responsiveness that affects liberal democracies nowadays. Furthermore, given the context of polarization and distrust, any democratic reforms undertaken by political elites alone are bound to have their legitimacy questioned by a large part of the population. What the numbers of the GenSurvey reveal, above all, is a sense of disenfranchisement and a belief that public decisions are taken by “few big interests, looking out for themselves and their friends.”

Citizens will be wary of any attempts to change the rules of the game, but particularly if these changes are defined by those who benefit the most from the current rules. Thus, efforts to rebuild the foundations of modern democracy, be it in the US or elsewhere, are unlikely to be sustainable if citizens are not effectively included in the process. In that case, why not constitute a large citizens’ assembly on democratic reform, to be subsequently validated through the popular vote? Or, as suggested by Archon Fung, why not empower ordinary citizens to make recommendations to Congress and the administration on how to address democratic issues?

The modalities for citizen involvement in this process are multiple. And while some models may be more feasible than others, one thing is certain: tokenistic approaches to citizen participation in democratic reforms are equally doomed to fail. Addressing the challenges highlighted by this survey will require more than politics as usual. But this can also be an opportunity for Americans to collectively reimagine the democracy they want.

David Karpf lecture at the American University on the impact of technologies on political activism.

A brief description of the talk from the Center for Social Media website:

Karpf walked his audience through an examination of internet age advocacy organizations: examining their effectiveness in running campaigns; how they run campaigns as compared to legacy advocacy groups such as the Sierra Club (an organization that predates the internet by nearly 100 years); and what the future of the netroots movements means for the future of all who are involved in advocacy work. Karpf, who served on the Sierra Club board of directors in graduate school, came equipped with a perspective that combines the physical experience of his grassroots campaign work and the intellectual experience of meticulously mapping the behavior and patterns of online groups such as DailyKos and MoveOn.